Netflix takes on Disney Plus with move into streaming Broadway musicals 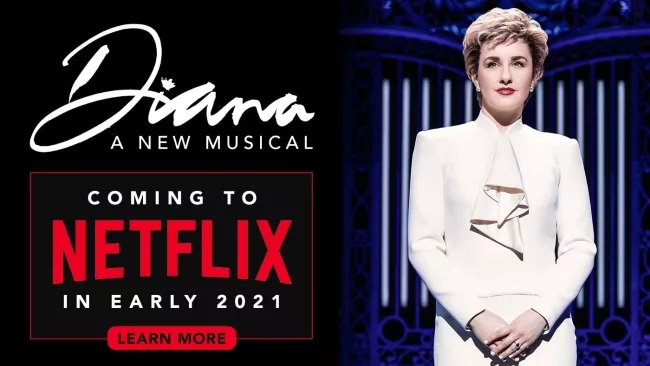 Netflix has bagged the streaming rights to a historical musical drama called Diana, based on the life the Princess of Wales, which is set to land on the service in the first half of 2021.

Diana: A Musical Story had begun previews at the Longacre Theater on Broadway, venue closures within New York – and across the US – have prevented live shows and forced producers to look towards digital streaming solutions.

The show's website has a date of May 25 set for its opening on Broadway, with its arrival on Netflix expected to be before that date. The show is planned for filming with an empty audience in the coming months, meaning that the production will have to navigate health concerns and actor safety in a city still coping with Covid-19.

Princess Diana had a highly scrutinized life, as the first wife (and eventual divorcee) of Prince Charles, a patron of countless charities, and a victim of a car crash that took her life at the early age of 36.

BroadwayDirect describes the show as an "electrifying new musical about a woman who chose to be fearless, and as a result became timeless." The run time is listed as 2 hours and 15 minutes, including an intermission, with a creative team spanning talent from musicals Memphis, Rock of Ages, and Come From Away.

Musicals, Mulan, and moolah
The announcement comes only weeks after Disney Plus launched the film of the Hamilton musical on its own service. While Disney had initially planned to bring the recorded performance to its platform in late 2021, it was brought forward by over a year due to lockdown measures creating more demand for online streaming content – and the run of Hamilton in live theaters coming to a preemptive close.

We wrote back in May that musicals could be the next big wave for Disney Plus, given Disney's licensing of its classic animated films for the stage. There have been hit stage musicals for The Lion King, Aladdin, The Little Mermaid, and more – and no singular platform has yet to emerge as a home for displaced musicals in a time of lockdown.

While Hamilton certainly saw a lot of users flock to Disney Plus, the incoming arrival of Mulan – with its add-on $29.99 cost – could well rub viewers the wrong way. Netflix continually shows it can follow through on growth in new genres, as with its courting of anime shows and Bollywood films for its platform. If Netflix can become a natural home for musicals, too, the Disney Plus vs Netflix battle would only heat up further.