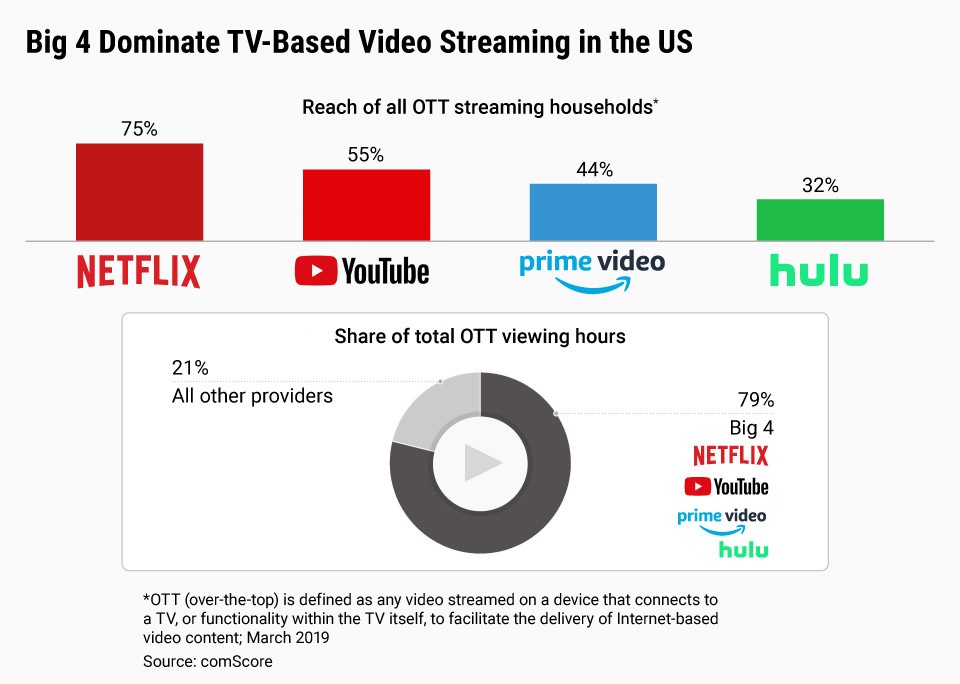 The big four streaming apps make up the majority over over-the-top (OTT) viewing right now, but that may change as Apple TV+, Disney+, HBO Max, and NBCUniversal enter the market and take back sitcoms like 'Friends' and 'The Office.'

In the past few months, everything Netflix has spent billions preparing for has begun to come to pass.

Preceding a new wave of video streaming competition from heavy hitters including Apple, AT&T, Comcast, and Disney, all launching in the next year, Netflix announced it's losing its two most popular shows. Friends will depart for HBO Max in 2020, and The Office is heading to NBCUniversal's service in 2021.

According to a recent comScore report, 64 million US households used over-the-top (OTT) streaming services in March 2019, through a smart TV, media streaming device, game console, and other means. The report found that Netflix reaches 75 percent of those households, followed by YouTube at 55 percent.

Amazon Prime Video and the now fully Disney-controlled Hulu reach 44 and 32 percent of those OTT households, respectively. The big four comprise 79 percent of total viewing hours, according to comScore. But for Netflix in particular, the big question is whether its continued investment in originals can replace the engagement it gets from licensed sitcoms.

Nielsen provided PCMag with data from its 2018 SVOD Content Ratings report showing that The Office was the number one Netflix show by hours viewed by a healthy margin last year—more than 52 million hours for its 200-plus episode run. Friends and its 254 episodes were second at over 32 million hours, and the rest of the top five were also licensed shows (Grey's Anatomy, NCIS, and Criminal Minds), not originals.

Part of the reason for that is syndicated shows simply have more episodes, but the data shows why Netflix has gone into more debt to bankroll billions of dollars in original content spending that often prioritizes quantity over quality. Netflix needs to own more content to keep users subscribed and streaming as more licensing deals expire and well-funded competitors enter the market.

For a deeper dive into the escalating original content war between all of these streaming giants, and where this increasingly cordoned-off landscape leaves consumers, check out our story on the streaming-industrial complex.