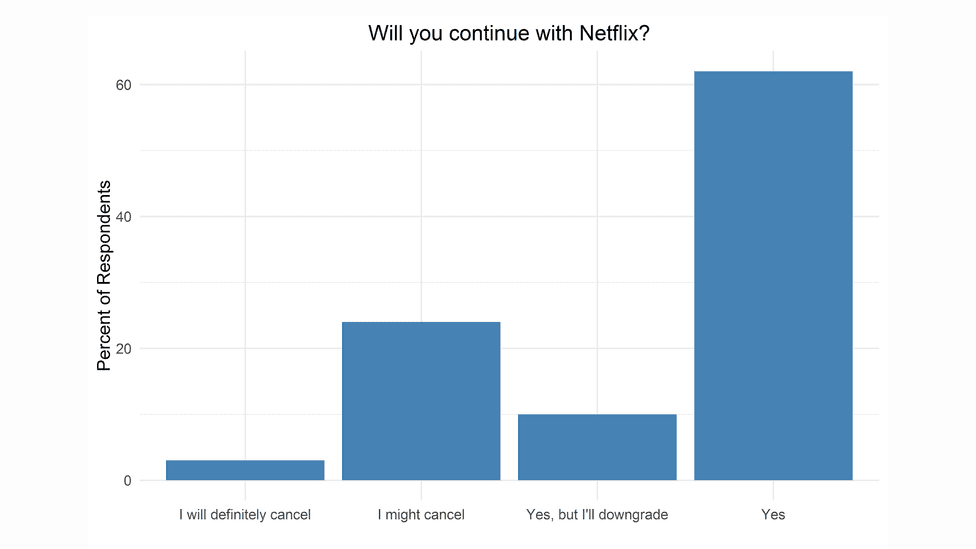 Streaming services took off because people were tired of paying outrageously high prices for cable packages they only used part of and for the occasional night at the movies. But as streaming providers proliferate, the cost of cord-cutting is getting higher and higher, and customers are thinking of opting out once again. This week, Netflix introduced price increases, and some of its subscribers have had enough.

The basic Netflix subscription is increasing from $8 to $9, the standard plan is going from $11 to $13, and the premium plan will now be $16 instead of $14. A Streaming Observer survey found 24 percent of respondents "might cancel" Netflix and 3 percent will "definitely cancel" in light of the price hike.

Wall Street, though, is unbothered and even impressed. The company's stock rose on the news, and analysts noted that the subscription cost is still lower than that of Hulu. Netflix earnings this quarter are also strong.

The company has invested its cash gains in content that compels customers to watch movies such as Bird Box—or risk being lost in a river of memes.

Netflix was ahead of the pack when it came to getting customers to cozy up inside their homes and binge shows and movies. It's unlikely that too many will abandon their hygge lifestyle or the hype surrounding the service.