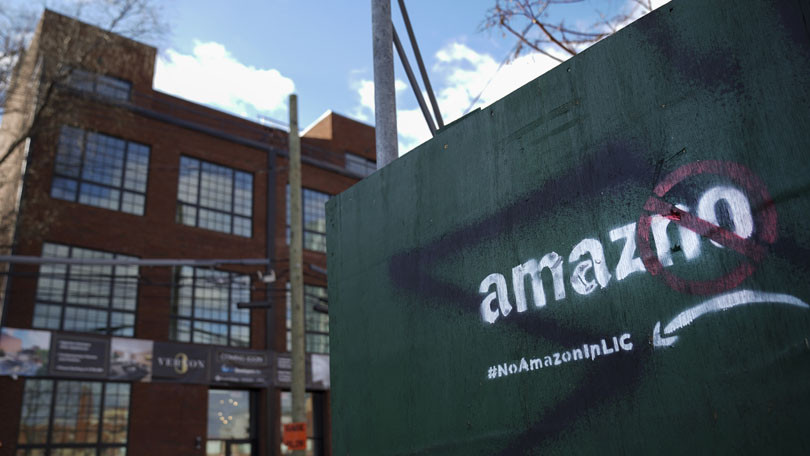 Amazon's decision not to open a new headquarters in New York may herald a time when tech companies have to start working with communities, rather than dictating terms to them.

Amazon backed out of its HQ2 deal in New York City today, apparently surprised and appalled by the strength of local resistance to the company's arrival.

I know this is PCMag, and this is only tangentially related to tech. But I live in Queens, one express subway stop away from the potential HQ2 site, so I can speak to some of the local issues involved.

Don't see this as anti-tech. Part of why New Yorkers felt free to reject this deal is that the tech sector in New York is doing just fine. Google and Facebook are both expanding in the city, in big ways, without major incentives. A new tech campus, sponsored by Cornell University and the Israel Institute of Technology, is being built a stone's throw from the HQ2 site right now.

That confidence is part of why many local residents considered Amazon's deal, which had $3 billion in tax incentives and little in the way of hard guarantees of neighborhood improvements, an unfair one.

Polls say most New Yorkers wanted Amazon's presence, but they don't differentiate between people who were actually paying attention, and people who just heard "25,000 jobs." The jobs Amazon said it planned to bring in, with average salaries of $150,000 or higher, were not the kinds of jobs struggling working-class New Yorkers were looking for; they're engineering jobs that would have brought bright young faces from around the world. New York has a history of being that kind of place, of course, and it should continue to be, but not without also caring about the people already living here.

The best thing about Amazon's HQ2 search, to most Americans, was the prospect of pushing a major tech titan into the many cities currently begging for high-wage jobs—to start to dislodge America's tech industry from its Seattle/San Francisco/NYC axis. Our nation has several overheated metro areas surging with activity and unaffordable housing, and many cities—often near those overheated places—waiting for their chance. To the rest of the nation, Amazon's choice of New York City was a big middle finger, showing that Amazon didn't care about revitalizing America, just about making the easiest choice to settle in a place close to the financial markets.

Western Queens is well-known as the most affordable spot currently left in New York City with an easy subway commute to midtown Manhattan. It's a ferment of immigrants and working-to-middle-class residents; in my neighborhood, one express stop from the Amazon HQ, we famously speak 167 languages.

An influx of highly paid tech transplants, local activists worried, would speed up the process of making nearby neighborhoods unaffordable for the retail clerks, bank tellers, and small shopkeepers who inhabit the area. In the wake of the announcement, my neighborhood's Facebook group filled with worried renters and a gloating landlord.

Now, of course, this could have been well-managed. Amazon's arrival could have been presented with a funding plan to improve the creaking subways, new projects to support lower-income homeowners, a move to unionize potential local workers, and stepping up rent stabilization enforcement to reduce potential resident displacement. But it wasn't.

And here's my "tech angle"—this all links into the growing consciousness that tech companies are going to have to deal with the effects of their success. Whether it's about personal abuse on Twitter, election manipulation on Facebook, or how an Amazon campus would drive out existing residents with higher rents, the big tech firms must start thinking like citizens, not just businesses.

You also can't discount how much New York City's activist class is suspicious of, and generally dislikes, the state's high-handed governor. Andrew Cuomo was just re-elected in a landslide, but that said more about the weakness of his opponents than about his own popularity or strength. Many folks I know only pulled the lever for him because they liked his Republican opponent less.

It says something that on my New Yorker-filled Facebook feed, the general opinion about this event isn't about jobs, or taxes, or unions—it's about wiping the smug look off Cuomo's face as he watches the subway rot and pretends he can't do anything about it.

In a city where the greatest crisis right now is a crumbling transit system, owned and run by the state government, which the governor refuses to fund repairs for, his declaration as "Amazon Cuomo" rankled. Cuomo and Mayor Bill di Blasio handed this deal to Amazon without engaging with, or offering concessions to, local neighborhood residents who want more housing, more schools, and better transit. The locals bit back.

Amazon, and Cuomo, could have done this differently. Tech can be better. If people push back, maybe it will have to be.